Tags: maple syrup, catering, movie making, filming, farming, babies, family, cooking, Becky and Andy,
It's been a long time since I wrote here because my night-times have been overtaken by a smallish loveable squishy baby man. He's approaching the three month mark and while he is sleeping better through the night, our days have been so fast paced that by the time I get him down (between 7-9 pm), I am creatively and physically spent. There goes my small window for any substantial writing.

I know it's been long, and I have a lot I want to catch up on. So this Friday, while Andy takes the kids on his weekly delivery trip to Viroqua, I have a few hours with just Little Liam and he really is a good enough baby that I can squeeze in a sentence or two on here. (Isn't Liam totally adorable?! I know, I'm in love and biased) 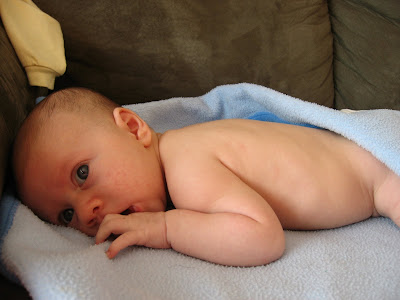 The dishes are a mile high and the laundry buzzer just went off, but I need a little writing therapy here.

One of the reasons the dishes are so piled up is that this week has been one big fat catering event for St. Brigid's Meadows.

I laugh as I think of it now. Tonight is Andy's last night for the gig, but it feels like we've been under cooking siege for the last three weeks. Down on Vince's farm, about two miles down County PI and from our Blue House, there is a full scale movie production set up. Vince and Dawn, through a series of knowing the right people and generously giving up their farm sanctuary for a week, have brought the farm into the limelight. Down the windy, tree-lined County Road PI, there lies a car that has "crashed" into one of the older trees and is the center-piece for this film production. They only film at night, as that is part of the precedent for the scene, which means the crew of 40+ sleeps from about 8am to 4pm. They awaken, return to the farm from Westby and La Crosse, and have breakfast.

That's where Andy and the rest of the farm come into play. He is in charge of catering two meals a night for these folks, in the Hundt farmhouse, from this last Tuesday through tonight (Friday). Breakfast is actually a full scale meal served around 7pm. The crew goes out and shoots for roughly 6 hours and then comes back for lunch. That's around 1:30am, in which Andy has gotten out of bed and set up again in the Hundt kitchen for round two. He's usually back in bed around 3:30am.

In the first part of the week, Vince was gone for an annual business trip. Kristin (who runs the dairy with husband Jason) is always in Madison getting her Masters from Monday through Wednesday. With both key people gone, Andy basically out of commission besides cooking and delivering all week and me with three small kids (housebound), the work of two full farms fell on Jason and Dawn's shoulders. Beef animals needed to be fed and one rounded up for a weekly date with the butcher on Wednesday. Dairy cattle to be milked twice a day, daily chores surrounding all that and care for the hogs and chickens to boot. On top of that, we are still collecting sap for maple syrup and there are trees tapped all over the woods surrounding Poplar Coulee Ridge (the Hundt farm).

It's been crazy in our home as well, with a tiny galley kitchen being used to feed 40 people twice a day for four nights, and no automatic dishwasher. I had the foresight, and God had the timing, to allow for a helper in our home. Since Sunday night, we've been enjoying the company and capable helping hands of our young friend Cortnie. You may recall, her family was integral in our Foxwood Farm days and she's on the old side of 13 now (14 in June!). It's her Spring break this week and her parents were generous enough to let us borrow her all week to help with the kiddoes. She's taken a special fondness to Liam and he to her. We joke that she's got lavender scented arms because she has an uncanny ability to get Liam to fall asleep under her stead. 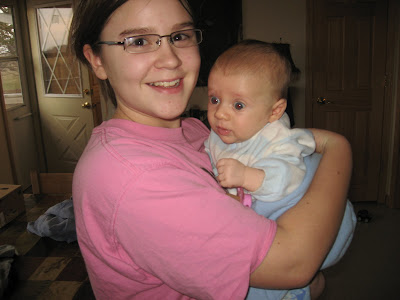 Here she demonstrates her Liam-taming ability early in the week. We couldn't have managed a peaceful household this week without her help. It's been amazing and we'll be sad to say goodbye as we take her home tomorrow morning.

In family news, Liam is very much smiling and cooing now. He's taking on a more unique look, but still reminds us of Ethan at the same age. 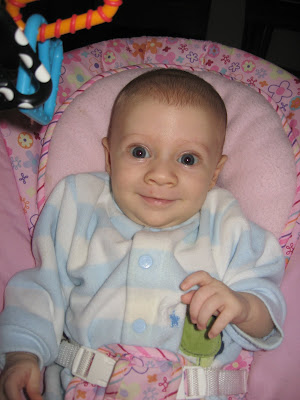 The kids are highly involved in his care and deeply interested in everything Liam is doing. Here you see Ethan and Elly helping with bathtime. 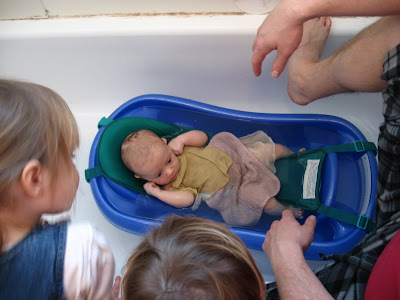 Just in case you were wondering about Ethan's hair and could it possibly get any longer...we have an update. After realizing that even in the dead of winter our son was sweating on his head, we finally gave in and cut his hair. Andy took him in the bathroom, set up a movie on the iPad and hand cut (no buzz-cut here) all those blonde locks right off. The finished product is a happier little boy who somehow looks a year older! See for your self: 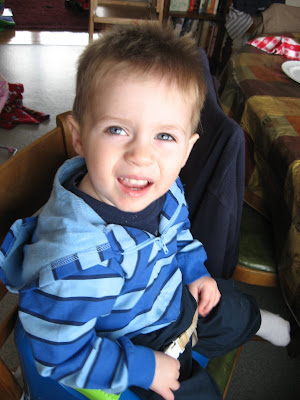 We're happy with the cut and will likely keep it short until cooler temps again.

We've been involved making maple syrup for the last two weeks straight (as I mentioned above). It's a process I am completely unfamiliar with, but have been delighted to learn about. Having no prior experience, I was unaware that there are old-fashioned methods to producing syrup and "new-fashioned" was as well. Not surprisingly, Vince is very proud of the fact that he successfully employs the more time-consuming and healthier OLD-FASHIONED method of collecting sap and turning it to syrup. 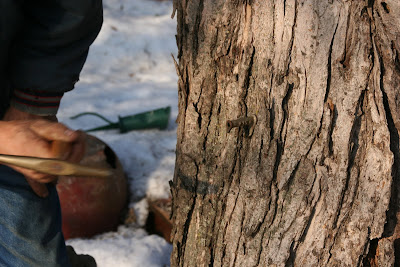 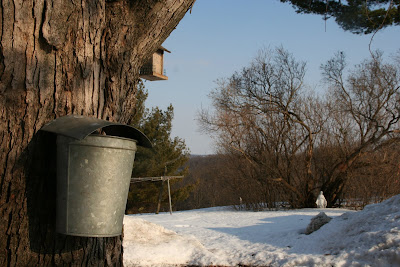 I say all this because plastic has been proven to leach unknown chemicals into food when they are in contact and most modern maple syrup operations use a host of plastic when making the syrup. Also, most maple syrup these days is made by dehydrating the sap (the process is not something I am familiar with). The sap here at St. Brigid's Meadows is brought up to temp by wood fire and evaporated nice and slowly. At the right time, it is poured off and finished in the house to be sure not to burn it. 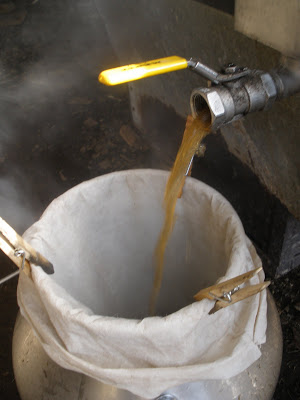 Exact temps and times are essential to produce the right consistency. Andy, Vince, Jason and Kristin spent all last weekend boiling sap, taking turns in shifts and going all day and night. 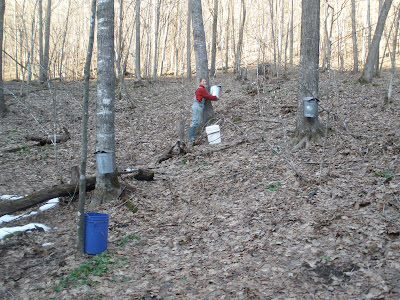 It's a lot of work, but can be fun with the right friends and "warming" beverages at your side. :-)

It takes 40 gallons of maple sap to become 1 gallon of maple syrup. And the unit that we use, with wood and flame, can boil 20 gallons per hour. You can imagine that the cost of this syrup isn't going to compare with Mrs. Butterworth's HFCS laden bottle at Piggly Wiggly. As Vince is fond of saying, "This is the genuine article!" and we're pretty proud of it. It tastes pretty amazing, too, which is more important than any other factor combined. 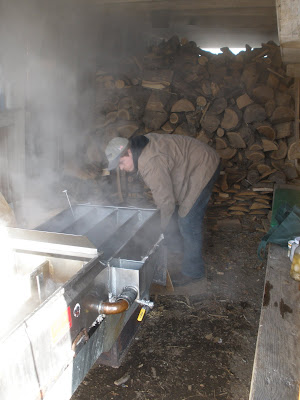 After tonight's catering I think we're going to go into a family hibernation of sorts and just refuel. I need some cookies and since our kitchen has been under siege, I haven't been able to bake at will. :-)

Oops, gotta go; Liam is up, the roasts I'm braising for tonight's "breakfast" are beeping and my laundry needs to be switched over.

Rebekah Sell lives on a small plot of land with her husband, Andy, on which they are hoping to build a sustainable homestead. With a small business and four kids, life is always interesting as Becky and Andy live fully the idea that the journey is the reward. Find her on Google+.

Good question about how syrup got started. The children are gorgeous and it is nice to peek into your busy, productive lifestyle. Thanks for sharing!

Becky and Andy, It's always good to hear about what's been happening in your lives. It sounds like very busy has been happening in your lives. Liam sure is a cuttie. I have a nephew that is named Liam. He is a curious one for sure. It looks like you are settling into your new life quite well. We here in Nebraska do have Maple trees but I don't think there the right kind to produce good sap for maple syrup. How much sap do you get from one tree? Just how long does it take to boil 40 gallons of sap down to one gallon of syrup? It seems like it would take quite awhile and a lot of wood too. However, there is no comparison to the real thing is there? I have to wonder who was the first person to think about doing such a thing as boiling down sap into syrup. Have a great spring family day.

EVENT UPDATE: Unfortunately, we've had to postpone our Tennessee FAIR to 2021 due to COVID-19.