While the general public is totally unaware of how the milk in the carton in their shopping cart got there, I have had an up close and personal view of this process. Let me welcome you to the... 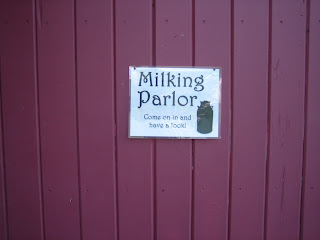 Milking involves a human intervention and extension of the natural lactation cycle of an animal. At Toluma Farms, the does kidded from January to April 2011; they raised their kids on milk until they were old enough to be weened between 2 and 4 months. During that time the mother does also were milked twice a day and that milk was sold. The does continued to be milked twice a day until October, when the herd manager decided they were not producing enough to warrant twice a day milkings. Since switching to once a day milking, the butterfat content of the milk jumped. Bulk goat milk is paid for based on the amount of butterfat; the farm actually earned more money on less milk, doing less work. How's that for working smarter?!

So to milk, we bring the does into a holding pen that is covered. Then they funnel through a gate, twelve at a time, to get into the milking parlor. They climb up a couple steps to reach the milking platform.

Once the goats are on the milking platform, they stick their heads in these "T" shaped headlocks because they know there is a tasty grain treat in the green trough. Once everyone has picked a spot, they are rolled back by a large hand crank so their udders can be reached for milking.

There is another kind of headlock that is cascading, it forces the first goat (or sheep) in to go to the furthest stall, which then triggers the next stall to open up. With a cascading system, you don't get animals wandering around looking for an open spot and it also means your platform doesn't have to be as wide, there is no need to roll them back. Here is a video of one in action (not from our farm).

One other interesting option for milking is a rotary milking machine. A huge investment, but you can sure milk a ridiculous amount of animals.

Back to my milking parlor... 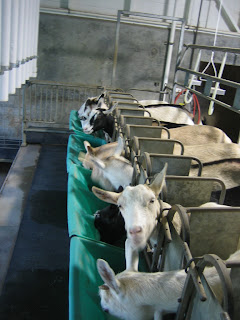 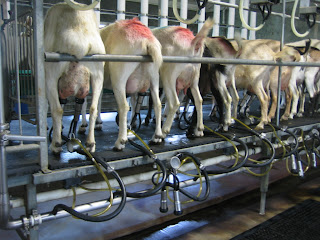 The above is the lovely view you have most of the time you are milking. The platform is raised so the people milking have everything easily reachable. Some parlors have the animals at ground level and a cement pit is put in for the milkers to descend into – two different approaches. The black hoses are called claws, which are attached to the goat's teats by a vacuum which pumps the milk into our 600 gallon bulk tank, seen below. 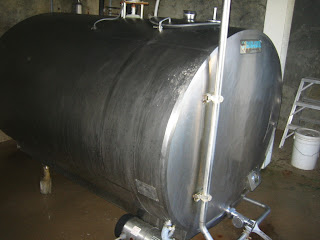 The milk is then pumped into a delivery truck twice a week.

Then there is cleaning, cleaning, cleaning to keep in mind with milking...the whole milking parlor setting, as well as storage and transport of milk is highly regulated, the milk regularly tested for bacteria counts and randomly tested by milk inspectors.

Well that is an overview of the milking process. Obviously, most people in this country drink cow's milk, with goat's milk gaining in popularity, while sheep's milk is still mostly novelty. I hope this gave you some sense of where your milk is coming from and an appreciation for the animals and people who are involved in bringing it to you!

Would have been nice to have a set up like that when we were milking cows. Standing in a pit with 8 cows to a side was the big thing back then. I think the turn tables were in design stage then. There is a goat dairy near here that turns everything into cheese, hard to catch it in the stores.

Callie, wow, I have never seen a operation like that before. With the volume of goats milked, I expect that the workers don't get much of a break between the morning and evening milkings. I didn't know there was that much demand for goat milk. Of course here in the midwest cows are all we think about. Sheep and goats are just something to keep the weeds down in unattended pastures. It looks like you are learning a lot about sheep and goats. It has been an learning experience for me just following along with your posts. Have a great day working on the Toluma Farms.

The Seed Garden: The Art And Practice Of Seed Saving

Join us for the 11th year of our flagship event at beautiful Seven Springs Mountain Resort!